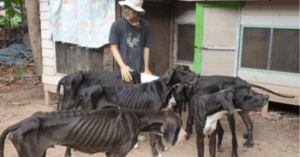 Thai authorities were notified of a dog farm abandoned by its owner in central Thailand. When they arrived, they found 13 emaciated Great Danes in cages. The animals were completely emaciated and looked like walking skeletons. Unfortunately, the woman and her two puppies died before help arrived.

Limelight MediaThe negligent owner left the house and the dogs a few weeks ago, claiming he could no longer feed them. The dogs were bred to eat on their own, but when they couldn’t, the owner left them in a cage without food. All the animals were removed from the house by volunteers from Guard Dog ThailandSome dogs were so weak that they could not stand up because they had not eaten. The animals’ skeletons were carefully loaded into a car and sent to a nearby veterinarian.

Some dogs were so weak that they could not stand up because they had not eaten. The animal’s skeletons were carefully loaded into a car and sent to a nearby veterinarian. 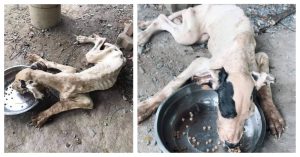 After inspection and maintenance, they were fed for the first time in weeks. Each dog struggled with extreme malnutrition, but thanks to King Rama X of Thailand, no expense was spared. As soon as he learned of the event, he offered to take the dogs in and cover the cost of their treatment, food and anything else they might need.

Share this heartbreaking story with your family and friends!